In mid-March, as COVID-19 became a global pandemic and people were required to social distance and shelter in place, it became increasingly more difficult to celebrate milestones or send well wishes to loved ones. Soon the resiliency of the balloon industry became apparent when balloon artists put their creativity to work installing delightfully colorful balloon decor for occasions of all types, from birthdays to babies.

Because balloons bring an unexplainable joy, these installations often impact the recipients and their neighborhoods more quickly and deeply than one ever thought possible. Following is one such story.

The Best Birthday Ever Thanks to Yard Art

Everyone should get to feel like a celebrity at least once in their lifetime. John got his time in the spotlight and accepted numerous tributes and accolades when he recently celebrated his 87th birthday! While there wasn’t a red carpet, a golden statuette award, or even a chance to thank his well-wishers in person, something else made his birthday extra special.

Because of local pandemic restrictions, Anne Marie, John’s daughter, was left with very few traditional celebratory options for this special occasion. She couldn’t even treat her father with carry-out from his favorite restaurant, let alone take him out to dinner. She was stumped, but not for long! Remembering how her daughter raved about the yard sign display for her 21st birthday, Anne Marie knew she was onto a new and even more exciting option. But how she wondered, could she take the same impact of a large sign and add even more color as well as an acknowledgment of his many years of loving life. After a short conversation with family friend and Pioneer Worldwide Market Development Director Dawn Aubert, she had the answer: Balloon Yard Art. It’s large, colorful, and could showcase his 87 years young in jumbo numbers!

John has lived in his current home for over 55 years, and while most of his neighbors know him by sight, few of them were certain of his age, until June 30, his birthday. Thanks to the spectacular balloon yard art, John was not only presented with a lovely physical gift, but also with many sentiments and memories that will live on in his heart for years to come.

Early on the morning of June 30, Anne Marie and Dawn arrived at John’s home to put together the big surprise. Within a few minutes, the construction of the birthday display was underway. Anne Marie was in awe of how, shortly after that, the neighborhood came alive with activity. Neighbors were stopping in the street as they passed by to compliment their work and chat, while socially distanced, of course! All were in awe of the balloon art and were thrilled and surprised to learn of her father’s big birthday. None would have ever guessed he was even close to that age!

Now, it was time for the big reveal. Anne Marie called her father and said she was on the front porch with his birthday gift. He guessed it to be a plant as he loves to garden. She replied he just had to come to see for himself. He opened the door and was immediately astounded by the sight before him. He bulleted her with questions, "Where did you get that? How did you do that? That’s for me? I can't believe it; it's so wonderful!" 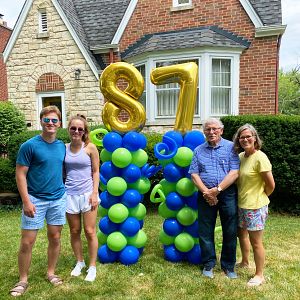 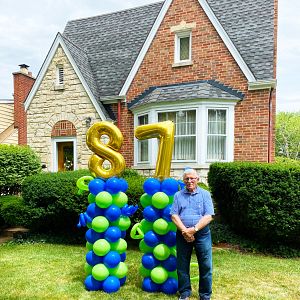 Pictures were taken, sent, and soon John became the social media darling amongst his community, family, and friends. Anne Marie remarked he continues to feel like a celebrity today because of the larger-than-life yard display, and the abundance of affection and well wishes he received from neighbors, friends, and family members who stopped by to take his picture, wave hello, and yell happy birthday.

The yard art stood for two days and then was moved inside, where John continued to enjoy his gift. Anne Marie was thrilled at her father’s reaction and was equally touched by the response from the community. “This seemingly small gesture brought so much happiness to my father but also had a huge impact on the neighborhood. It was a celebration of life, and it brought us all together, which is amazing at this moment in time. I could never have predicted the attention Dad would receive because of this balloon display. You might say we ‘shrunk the neighborhood,’ if just for the day.”

These colorful Yard Art designs are the cure for any quarantine blues! Next time you post your installations, be sure to include the hashtag #qualatexyardart in your post for a chance to be featured in our stories!

Happy ✨90th✨ Birthday, sir! What an honor to help these sweet folks celebrate such a wonderful milestone🥳 ... PS, all of my childhood tree-climbing dreams came true that morning 😬

That’s why we do what we do. It’s not a job it’s love! Happy 101 Birthday Auntie Fil! We are honored to be part of your big day! #dreamfactoryballoons #dantelonghicba

Lexi’s 2nd birthday was LLAMAZING 🦙💕! We love mixing fiesta into any party 💕 November can’t get here fast enough 💚💜🧡💛💗💙#fiestasanantonio . . . Let us help you decorate your next celebration! Call/text us at 210-445-7956 for more info!

A post shared by Balloons Boutique San Antonio (@balloonsboutiquesa) on May 26, 2020 at 1:33pm PDT

The best thing about being the “balloon girl” is that I always get to add to peoples joy!! 💗 The calls I get are from people who are celebrating something wonderful and exciting; a birthday, baby, anniversary, grand opening, etc. and I am SO glad to be there. 🥳 . Thank you for continuing to book joy during this time. It means the world to us!

We went BIG! So fun to do this install for a birthday wake up surprise 🌈🎉🎈Nothing like a house covered in balloons to make a girl happy! 💖

✨Swooning over today’s install for a drive-by Bat Mitzvah! Pink gives us so much life! 💕

Are you interested in hiring a local balloon artist to install Yard Art for your upcoming celebration? Use our Balloon Pro Finder℠ to search our database of trusted business owners around the world.