He’s red, blue, yellow, and a very fine fellow – he’s Mr. Q! Whether you’re a distributor, decorator, entertainer, or anyone who loves Qualatex balloons, chances are you’ve seen Mr. Q. Maybe you saw him at a Qualatex event, on the Qualatex Facebook page, on the back page of Images or Balloon Magic – The Magazine, or as a cute little plush toy.

Mr. Q is many things to many people. For some, he’s the friendly mascot of Qualatex, The Very Best™ Balloons, who makes show-stopping appearances at Qualatex-sponsored events. For others, he’s a superhero who fights against bland, uninspired design with Qualatex balloons. And for others, still, he’s a scientist hard at work creating the next big leap forward for balloons. 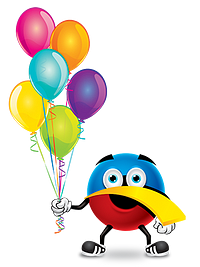