Very few of us can say we’ve experienced a lifelong love affair with anyone or anything.  Marvin Hardy, CBA is one of the lucky few who can say they’ve experienced both. This is the story of Marvin’s extraordinary love for Penny, his wife of 35 years, and his lifelong love of balloons.

These two romances intertwine, but here’s where it all started. Marvin is an Army veteran.  He retired from service in 1980 but continued to be involved by volunteering at the local air force base. On one of these occasions, a clown was entertaining children by making balloon figures and Marvin was mesmerized. Though the clown had a repertoire of only four figures, it still set off a light bulb in Marvin. He realized how much more could be made of just a single balloon and what joy that would bring to anyone young of heart. It became his passion from that moment forward.

Marvin met Penny in 1983 when she was the assigned typesetter for his first publication, and he was immediately smitten.  The rest, as they say, is history. Apparently, Penny was too because not long after meeting, they married and hit the road in their van loaded with balloons, balloon kits, and his publications.  They stopped at every bookstore, library and toy store spreading their love of balloons. It was during this time Marvin trademarked the name Balloon Magic, which would later be his introduction to Pioneer Balloon Company. 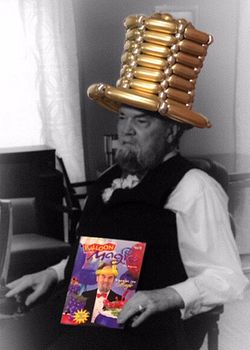 Marvin met Ted and Betty Vlamis of Pioneer Balloon Company (PBC) more than 30 years ago at the Balloon and Singing Telegram Convention.  Ted and Betty were so impressed with Marvin, his balloon work, and his publications that they forged an alliance that still exists today. Marvin granted PBC the rights to his trademarked name Balloon Magic, and it morphed into a balloon magazine published by PBC for 23 years and counting.  It’s befitting that Marvin was on the first print cover of Balloon Magic – The Magazine, and that now he appears as the cover story for the first digital edition.

Marvin and Penny’s work with balloons continues to this day. Recently, after a move to Treeo, a Senior Living Community in Orem, Utah, USA, Marvin and Penny began sharing their stories and demonstrating their skill with balloons. It didn’t take long before the residential manager engaged them to create a large display to showcase their talent for the residents, their families, and the general public. They agreed, but just how would this pull this off? Enter Balloon Man Shan.

Shan Ingleby, or Balloon Man Shan of Salt Lake City, Utah, USA, is a lifelong friend of the Hardy’s. He and Marvin meet almost weekly for personal tutorials and a makeshift jam. Marvin has always wanted to tag along with Shan on a large-scale decor build, so the two decided to make this happen at Treeo, Marvin’s residence.  In thinking of an occasion on which to feature this magic, you can imagine what came to mind…Valentine's Day!

Shan said he organized this display as a tribute to Marvin and Penny.  “I did this to honor Marvin and Penny and their lifelong investment in the balloon community.” Shan, along with his crew of Doug Rider, Jessie Blevins, Diana Habovstak, Pat Crosland, Nate Robinson, Tamsyn and Helen Spackman, Melanie Mielsen, and Lance Fletcher, inflated and sculpted more than 5,000 Qualatex balloons to transform the Senior Community’s public spaces. Shan ensured that Marvin and Penny only observed and advised, and above all, were the guests of honor. The decor was spread throughout the building—everything big to small, including tabletop centerpieces.

“Everyone was just amazed, said Marvin and Penny.  “None of the residents had ever seen balloon decor first hand. They’d seen pictures, but nothing in person. They were all just blown away.”

In addition to the decor, Shan and his crew donated their time to make balloon sculptures for the family and friends of residents. A local television station got word of the special event and even ran a feature on the evening news!

Though Marvin has promised Penny no more decorating jobs, he also interjects, “I will be doing balloon figures until the day I die. I have been with Pioneer for 32 years and it’s not going to end here.  I will be working with balloons until I am no longer on this earth.”

Learn more about the build and view photos from the project here.